Pioche was once the baddest town in the West, badder than Tombstone, Deadwood or Dodge City. 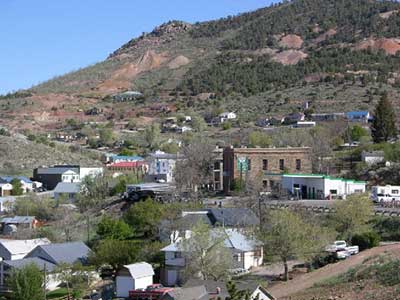 In its heyday as a silver mining center it had 10,000 residents, 100 bars, and 100 whore houses. Now it’s another living ghost town, and we take the night at the only accommodations around, the old haunted Overland Hotel & Saloon.

We break the seal of night with a home-style breakfast at The Silver Café across the street. Then, we hook up with local historian and amateur gunfighter Jim Kelly offers to show us the Boot Hill Cemetery, where, in its boom years, 72 people died of lead poisoning, croaked with their boots on, before anyone died of natural causes.

In 1873, the Nevada State Mineralogist reported to the State Legislature “About one-half of the community are thieves, scoundrels and murderers.”

Alongside Murderer’s Row, a section in the cemetery with markers for over 100 murderers, Jim hands me a six-shooter, and challenges me to a gunfight. Somehow, I win, and he crumples like a kicked tent down onto the grave of his great grandfather, shot down by local rival. 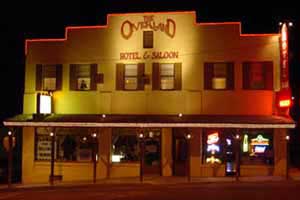 Back at the long cherry wood bar, both staff and guests alike talk about their encounters with ghosts, including bartender/maid Stephanie Haluzac, who speaks about the many spirits she’s faced over the years. Once she was in the laundry room folding a towel when a heavy glass ashtray came flying across the room. She gave up smoking then and there.

Almost like a Twilight Zone episode, or The Rapture, every human seems to have been plucked from the landscape, though all the facilities…bathrooms, picnic tables, campgrounds, boat launches, information signs, a stamp machine for the state park passports…are perfectly presented, waiting for a dinner party. It’s nice having these resplendent parks to ourselves, and we take some short hikes, skip some rocks, take some pictures, and then start driving north.

Looking at the map, it seems there might be a shortcut over the Mount Wilson Byway Road. It’s a gravel road, almost entirely through BLM land, that crooks through a volcanic caldera overgrown with pinyons, junipers, and, as we climb higher, snow. This is a stunning drive, past high peaks, around councils of aspens, ponderosa pines, and the exquisite non-existence of right-angled civilization. Even in our GMC Yukon, in four-wheel-drive, we skid and swerve in the ice and snow, sliding sometimes like a fried egg on Teflon, but finally crest the snow-covered pass at 8,900’, looking over to the great girth of original country, and beyond to a sere horizon.

Then we slowly unwind the back side, calipering back down to Route 93, and then northeast to the border, passing along the way herds of roan horses, wild and running, more here than in any place in America. 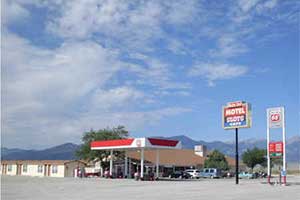 We drive into the thick, dark wings of night, and finally reach the Center of Nothing, Nevada, featuring the Border Inn Casino, which is half in Utah, and half in Nevada. My phone at bedside can’t figure out the time zone, as Nevada is an hour earlier than Utah, and the digital clock keeps beeping and bouncing between the two.

It’s a chilly, stelliferous night; I can reach up and nearly touch the spill of The Milky Way. It’s so bright I cast a shadow.

This is a privilege, and ancient right. More than two thirds of the U.S. population, about half the EU population, and one fifth of the whole world lives where the possibility of seeing the Milky Way with the naked eye is no longer. Here, it is practically splashing into my lap. 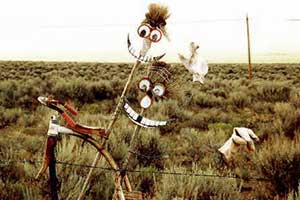 In the soft matutinal light of the new day we make the short drive to Baker (population: 68), then up towards Great Basin National Park, the only National Park in Nevada, and one of the park system’s least-crowded. Along the way we pass a long series of fence posts festooned with whimsical art, from carvings to car parts, tin cans to horseshoes, sculptures to paintings, scarecrows, mannequins and aliens…it’s what locals call “Post”-Impression Art.

At the visitors center we meet Ranger Kelly Carroll, who offers to show us around (we are the only visitors at the moment), and takes us on a short walk in the shadow of Mount Wheeler, second tallest peak in the state. 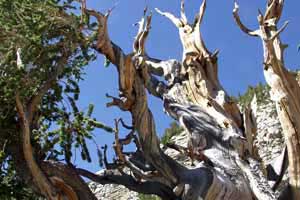 The park is home to the oldest trees in the world, and Kelly tells the story of geology student Donal Currey who, in 1964, came to study ice age glaciers at Wheeler Peak, collecting tree ring data. In a Bristlecone pine he was sampling, his coring got stuck. So he asked permission from the U.S. Forest service to cut down the tree. Once cut, and the rings counted, there was this realization that the felled tree was almost 5,000 years old, the oldest tree ever recorded.

Since then, older trees have been discovered, but their locations are kept secret. 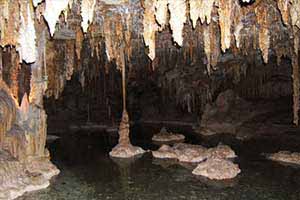 Another ranger, Robb Reinhart, then takes us on a tour of Lehman Caves, one the country’s most richly decorated caverns. Once inside this helical pit, Robb leads us through a limestone and karst passageway on a journey to the center of the earth, or at least toward the fantastic fallout of hypogene forces: speleothems, dripstones, sensuous flowstones, esophagus like tunnels, clear pools, and the carrot-shaped stalactites and stalagmites (memory rule: stalactites hang tightly from the ceiling; stalagmites might someday reach the ceiling) that grow a centimeter every thousand years.

It’s a fairytale world, artfully lit, and I vow to return to bring my sons, and to climb Wheeler Peak.