‘The Reno Portraits’ offers a rare opportunity to examine the paintings of a man who gained international attention as a photographer. Maintained in storage by his family for several decades, Gus Bundy’s portraits, which date from the late-1950s to the last one executed in 1983, are just now being made available for public viewing.

In the late 1950s, at the time the Marilyn Monroe-Clark Gable motion picture “The Misfits” was being filmed in and around Reno, Bundy’s disturbing black and white and color photographs depicting wild horse round-ups on the Smoke Creek Desert southwest of Gerlach, Nevada, reached a wide audience. They were featured with articles that appeared in issues of Time, Newsweek, and The New York Times.

Bundy’s extensive collection of photographs, prints, and negatives numbering over 40,000 images, is now archived in Special Collections in the UNR Knowledge Center.  Curiously, Bundy vigorously resisted efforts to pigeonhole his activities during his lifetime, and denied that his profession was photography. Nor would he accept the notion that he was a painter, sculptor, printmaker, or jeweler, even though at one time or another Bundy devoted substantial amounts of time to each of these disciplines, and acquired or made tools necessary to practice them.

Gus Bundy rarely signed his work. Nor was it his practice to record the year of execution, or the models’ names, for that matter – all of which was perfectly consistent with his philosophy that making art was an activity in and of itself, “an enriching experience.” The raison d’etre for his painting had little to do with documentation or commercialization. Bundy seldom priced his work. Sold few paintings. Held most of them in storage. He reasoned – why do anything more than savor the act of painting, carving wood, drawing with a stick of charcoal or taking a photograph. Art and all the other aspects of his life were parts of a seamless whole. In more candid moments, he did concede his art training has been “handy” in sharpening his judgment in all kinds of challenging situations.

“Pose Please!”  When announced by the stocky man with a deep, authoritative voice, it must have seemed like a whip cracking behind the ears of the artists who had gathered to draw and paint. They knew immediately that the ten-minute break was over, and that it was time to turn their attention back to the model. The prompt timekeeper who alerted the artists was Gus Bundy; those at the easels and benches were members of the Portrait Workshop, an informal gathering of northern Nevada artists that had been meeting since 1957. On Wednesday mornings, they would pay a nominal fee to underwrite the rental of a room, and engage a sitter who would pose for three hours.

Marge Means, now in her 91st year, was one of the original Workshop movers and shakers. In 1957, a relocated Bay Area painter named Hall obtained the financial support from Harold’s Club that enabled her to start a portrait workshop. When Hall left in less than a year, Means and Bundy decided to continue the Workshop on their own.  Means devoted her next 33 years to directing it. Before his death in 1984, Bundy served as its regular facilitator – keeping the artists on schedule: drawing for twenty-minute periods, with 10 minute breaks between. This division of labor worked well, and, through the years, the portraitists appreciated Means and Bundy’s volunteer efforts.

From the beginning, there was one question that needed to be addressed regularly. It concerned models. From convincing a relative to serve as a sitter, to corralling a total stranger in the aisle of a supermarket for the same task, Workshop members were continually on the lookout for persons with striking facial characteristics, and a compelling presence. Because sessions were held during morning hours, when most men were at work, a majority of the models were women. Because it was northern Nevada just after the half-century mark, the sparseness of Reno’s ethnic population often made it difficult to locate minority sitters. However, Bundy’s portraits reveal that persons of color occasionally did pose for the Workshop.

Most Workshop participants chose to paint heads and shoulders rather than to depict sitters from the waist up or full-figure. Because of time constraints, canvasses tended to be modest in size, and the artists devoted less time to rendering the backdrop behind the model. Occasionally, a subject would bring in some kind of attribute: a guitar, cane, hat, even a cat, or other object that would more specifically define his or her persona.  Noted Reno architect Graham Erskine once sat for the Workshop, and in addition to holding a pose, he cradled a book in his hands, and read poetry to the artists. Ruth Hilts remembers incurring Bundy’s “anger” when she posed wearing an acrylic leotard that appeared to him to be genuine animal skin. It wasn’t until the label on the garment was examined that Hilts was permitted to continue. It is apparent that with most paintings, attention was given over to obtaining a likeness – to the right relationship of eyes, nose and mouth, more than to exaggerating features that might attract a caricaturist.

After fifty-six years, the Portrait Workshop is still going strong. Thanks to the diligent leadership of Renate Neumann, the group meets in the back room of Nevada Fine Arts on South Virginia Street in Reno. Previous locations included the 1936 Art Deco Southside School Annex on East Liberty Street, and later, a classroom in the venerable McKinley Park School that faces the Truckee River.

August Bundy was born in the Greenpoint section of Brooklyn, New York in 1907.  Raised in a large family, and educated in public schools in Manhattan and on Long Island, by the time Bundy reached his mid-teens, he had been encouraged by a supportive teacher to take advantage of his obvious artistic talents. He heeded the advice, enrolled in Saturday classes at the Brooklyn Museum, then moved on to the Grand Central School of Art, and his first significant teacher, Arshile Gorky. Within a decade, Gorky was to become a seminal force in the Abstract Expressionist movement that virtually consumed the art world in the late-1940s and 50s. The Art Students League played an important role in Bundy’s formal art education. He spoke respectfully of his friendships with well-known artists on the ASL faculty, notably Thomas Hart Benton, with whom he worked on mural projects in New York City. Bundy also helped the acknowledged master of anatomical drawing, George Bridgman, set up for life drawing classes, and, at the end of his life, Bundy left a collection of nude drawings which reflect the Bridgman style of rendering.

Bundy’s journey from New York to Reno followed a circuitous route. On his way to Japan in 1939, Bundy stopped at his friend Jim Greil’s home in east Washoe Valley. According to Bundy, he intended to travel throughout Japan in search of  “curios.” In the process, he acquired an impressive collection of Ukiyo-e woodblock prints, netsukes, snuff bottles, and ivory sculptures. More importantly, he met and married Jeanne Amberg, who grew up in Japan. Widely diverse events conspired to hasten the Bundy’s departure from the Orient, among them evidence that Japan was moving more precipitously to a wartime-footing, and the fact that Jeanne was expecting a baby. Impending fatherhood?  The question was where to resettle. New York City was passed over; it was not a place in which to raise a child.

The 1939 visit to Nevada turned out to be one of the deciding factors. Bundy had been impressed with Washoe Valley, its sparse population and compelling scenery, especially as it was located on the leeward side of the Sierra Nevada. By 1941, Gus and Jeanne occupied the small house and 5 acres on the west side of Washoe Valley next to Bowers Mansion. Bundy began to expand the living space to accommodate two daughters: Leontine (Tina) and Molly, and guests who came to rent separate quarters while taking advantage of Nevada’s liberal divorces laws.

Bundy seems to have been inspired by the presence of Workshop participant Joan Shonnard’s guitarstrumming son, Dave, deeply absorbed in his music. The artist’s brushwork is bold. The variety of colors, particularly the cool-warm contrasts in the face, bring to mind the palette of the European Fauvists: Andre Derain and Matisse. The countervailing angles of arm, sweater, collars, sloping shoulders, all heighten the monumental feeling of this uncharacteristically large painting.

Beth Isaeff modeled for the Workshop in the early 1980s. Sitting on a raised platform before the assembled<b> </b>artists, they peered from their canvases to Beth, and back, all very intent on “capturing” her likeness. Bundy transformed this petit woman into a formidable figure, made more columnar by moving her to the far left side of the picture plane. The decisive daubs of color that underscore Isaeff’s features convey the model’s resolve, and her smartness. Contrast that with the more fluid brushwork in the background, a treatment not unlike a photographer adjusting focal length to soften the area around his subject.

Gus Bundy’s daughter, Tina, contends that her father’s portraits never possessed the feel of other Nevada artists, that they had a decidedly eastern perspective to them.  Rather than adopting the earth tones and heft of local artists Robert Caples and Craig Sheppard, Bundy relied on rapidly applied expressionistic strokes, complimentary colors that gently vibrated rather than clashed. Witness Bundy’s sympathetic study of a youthful Edna Benna. Benna and her late-husband, Bruno, have been major contributors to northern Nevada’s cultural life. Bundy convincingly conveyed her essential dignity and reserve, while, at the same time, he suggested strength by sharpening her features, and by firmly delineating the contour of her head. Means recalls extending the invitation to Benna, who, in turn, purchased her portrait, which still hangs in the Benna residence.

The portrait of the unidentified African-American woman wearing the oval blue mantle is, in this writer’s estimation, one of the strongest paintings in the show. There is little apparent hesitancy as the artist thrust his brush at the canvas. He not only placed his model near the center of the picture frame, but, against this symmetry, established an emotional disequilibrium by means of the upturned corner of her mouth, and the sidelong cast of her eyes, both of which strongly suggest suspicion tempered with shrewdness. Would it be advisable for any viewer to intercept his model’s intense gaze? 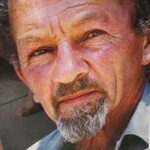 The Reno Portraits exhibition is an important historic and artistic landmark because, over the years, Bundy served as an enthusiastic advocate for and motivator of artists in northern Nevada. This writer commends the Capital City Arts Initiative for bringing about this reawakening, for calling the community’s attention so deservedly back to Gus Bundy.

Jim McCormick attended the University of Tulsa where he received a Masters degree in art. He joined the faculty of the University of Nevada, Reno in 1960, and offered instruction in printmaking, drawing and art history prior to his retirement in 1992. From 1995 to 2005, he directed the Nevada Art Research Project at the Nevada Historical Society, a program that documented Nevada-related visual artists from the mid-19th century to the present.